PAR (Photosynthetically Active Radiation) is NOT a measurement or “metric” like feet, inches, or kilos.
Rather, it defines the type of light needed to support photosynthesis in plant life.
Through photosynthesis, plants convert light energy into chemical energy, which is the food they use to grow and thrive. 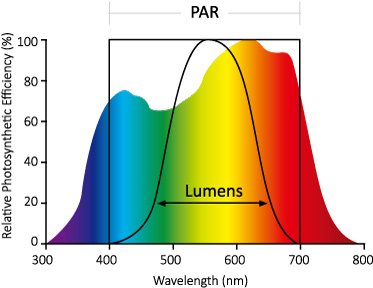 Light is generating a photochemical reaction.
In our eye it is reacting with the photo receptor in different versions S, M and L.

In plants, the light is reacting with Chlorophyll a and b.

The total amount of light (PAR) that is produced by a light source each second.
PPF measures the “photosynthetically active photons emitted by a lighting system per second”.
Expressed in μmol/second.
PPF does not tell us how much of the measured light actually lands on the plants or any other surface.

Neither it tells us something on the composition of the photons and wavelength of these, having a big impact on the efficiency used by crops.

Today all photons in the whole spectrum are weighed equally, what makes that the values are somewhat difficult to compare.
Take for example the PAR value of HPS SON-T from recent generations – the PAR value you get can get as high as 2.1µmol/J while this value doesn’t tell you anything about how efficient these photons are for your plants.
A LED grow light from the same performance (while most recent luminaires produce a much higher efficiency) but with the photons wavelength matching your crop and growth stage, might give you a 25% improvement in growth.

Today’s method of weighing the spectrum is not really adequate.

The whole spectrum is weighed equally by counting the photons in the photosynthetically active region (PAR). 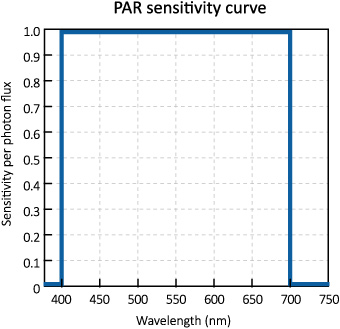 Weighting the emission spectrum of the light source with plants’ spectral sensitivity curve (“plm/W”)This curve is derived from the chlorophyll absorption spectrum taking into account internal energy transfer processes of the plant / leaves. 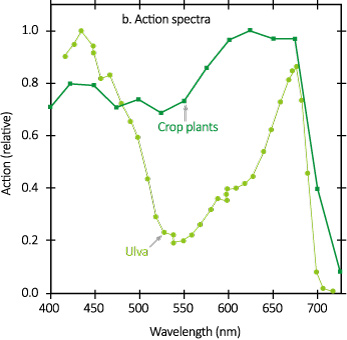 Keep also in mind that wavelengths above 700nm which have a major impact on. Phytochrome Pfr don’t count in the PAR numbers, neither do UV and wavelengths below 400nm.

The Yield Photon Flux YPF weights photons in the range from 360 to 760nm based on plant's photosynthetic response.
When the exact spectrum of the grow light is known, the Photosynthetic Photon Flux (PPF) values in μmol/s can be modified by applying different weighting factor to different wavelengths.
This results in a quantity called the Yield Photon Flux (YPF).
The red curve in the graph shows that photons around 610 nm (orange-red) have the highest amount of photosynthesis per photon.

However, because short-wavelength photons carry more energy per photon, the maximum amount of photosynthesis per incident unit of energy is at a longer wavelength, around 660 nm, what is also called deep red.

The YPF curve as shown below was developed from short-term measurements made on single leaves in low light.

Some longer-term studies with whole plants in higher light indicate that light quality may have a smaller effect on plant growth rate than light quantity. 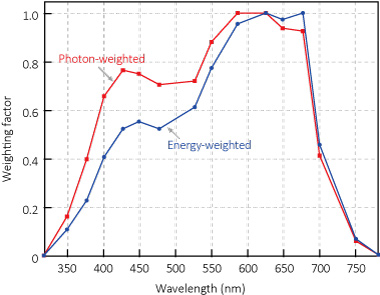 The relation between light and the energy it can carry is described in the Law of Planck.

This law explains us why photons in the red spectrum have a higher impact on plant photosynthesis than for example a blue photon.

Or simply expressed as a rule of thumb, the energy of a photon µmol in J ≈ 120/ λ where λ = the wavelength of the photon in nm.

From this relation between the light wave length and the energy, we can conclude that red photons in the 660nm bandwidth can carry much more energy than longer wavelengths like blue 450nm.
Maximum energy of a deep red 660nm photon ≈ 660nm/ 120 ≈ 5.5µmol/J

Of course above values are absolute maximum ratings.
At this moment the highest efficacy what has been reached in a 660nm wavelength LED package is 3.5µmol/J (Osram Oslon Square V2 – Q1 2018).
This also indicates that in the future further major improvements on efficacy can be expected.

The amount of light that actually reaches your plants and algae within the PAR region or the number of photosynthetically active photons that fall on a given surface each second.

This also explains why LED grow lights foreseen from advanced optics outperform those without optical controls. Similar to white light applications, a LED emitter has a rather large light distribution – without corrections by optics controls a big piece of the emitted PPF energy doesn’t land on the canopy where you want it. 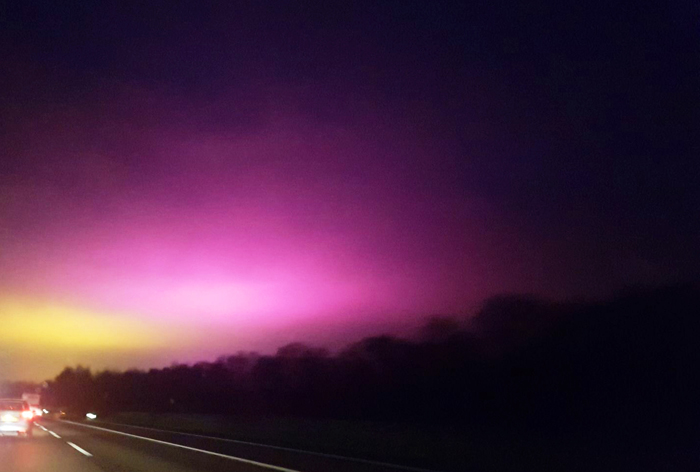 Greenhouse light spill leading to lower PPFD values and enormous energy waste. Light spill is defined as all the energy which is created and is not absorbed by the leaf.

Daily Light Integral (DLI) measures the total amount of light that is delivered to a plant every day.
DLI is a cumulative measurement of the total number of photons that reach the plants and algae during the daily photoperiod.

DLI measures the number of “moles” of photons per square meter per day and is expressed as mol/d.m².

Photon Efficacy refers to how efficient a horticulture lighting system is at converting electrical energy into photons of PAR.

With the PPF and the input wattage, you can calculate the efficiency.

The higher the number, the more efficient a lighting system is at converting electrical energy into photons of PAR.

But remember this number doesn’t tell us anything about the effectiveness of the light on your crops and doesn’t count the light frequencies above 700nm.