Yes of course the first things what count are your yields, your crop structure, your health of your plants, your balance between biomass and growth, your THC and CBD levels,…
The only influence a LED grow light can make on that is presenting you the right light spectrum, the correct amount of micromoles per second per square meter and a good light distribution over your canopy.
But let’s not forget one of the most important reasons why you might want to implement LED grow lights on your crops, because they can save you a tremendous amount of money on energy saving.
So why is it that one LED grow lamp gives you 1.8µmol/J (micromoles per Joule or per Watt per second), while another one gives you 3µmol/J and others 3.5µmol/J?
It is easy to claim that your LED grow light is going to be more energy efficient compared to classic technology bulbs like HPS or Metal Halide, but how do you make the difference when you compare LED to LED?

First of all you have to understand that not every LED is the same.

A lot of common used LED emitters in grow lights are actually white light LED packages and are developed to produce a maximum of lumens per watt.

These LED packages start inside from a blue LED die and convert the blue color to the green and yellow middle spectrum by using yellow and red phosphor.

The amount of blue light what remains depends on the amount and mix of both phosphors.
The more phosphor and the more red phosphor, the more the LED package tends to lean to what we know as “warm white light”.

In many advised grow spectra you can detect the curves as above in the 400nm to 650nm bandwidth so they use a lot of these blue phosphor corrected LED emitters.
What you have to keep in mind is that this conversion technology is not optimal for plant spectra efficacy as you will learn below, resulting in lower µmol/J values so less micromoles per KW.

LED grow lights using many of these white LED emitters turn up with final efficacies of 1.8µmol/J to 2.1µmol/J while market leading efficacies tend towards 3.5µmol/J which means you get (compared to a 2.1µmol/J luminaire) 66% more effective micromoles for the same energy consumption.

The CCT values of a COB can be 1/1 compared with these of single LED packages. 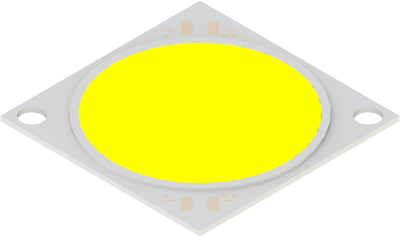 A typical look of a COB – starting from internal blue LED dies with phosphor cover to convert to green and yellow.

Never the less we have to be careful with making statements about COB technology for horticulture, as there are recently new technology developments from leading companies like Seoul Semiconductor, which start of from purple LED dies and convert with blue, green and red phosphor to create an extremely wide spectrum from a single COB.
So when you look for something what mimics the sun this is for sure a technology to keep a close eye on.

Still when you look at efficacy as leading driver this technology can’t (yet) be compared with direct wavelength emitters as explained further below.

Specific horti LED emitters which directly focus on the wavelengths which give maximal return on Chlorophyll A & b, Carotenoids and Phytochrome Pr & Pfr impact, are able to create up to 80% more micromoles for the same amount of energy.

Below illustration from Osram Opto Semiconductor shows how a single LED emitter can focus exactly on that wavelength with highest plant response.

Therefore we are focusing in horticulture lighting on the 450nm, 660nm and 730nm LEDs. 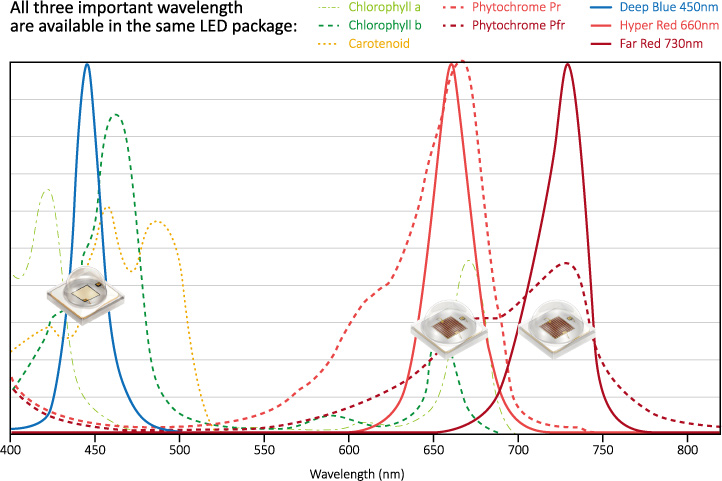 In the 660nm package at nominal drive current 350mA the efficacy goes as high as 3.91µmol/J what is nearly double from white leds.

So as a LED grow light designer you have to make the trade-off between maximal micromole to power efficacy by using a much higher number of LED packages (which are fairly expensive) or finding the sweet spot where price to micromole is at its highest point of return on investment.

As seen above the efficacy of LED grow lights developed with emitters focusing directly on the exact wavelengths are easily outperforming other LED grow lights with over 60%.

As you don’t want more micromoles over your canopy, this 60% is pure gain on your electricity bill, from one LED grow light compared to the other one…

Second, feed you plant the exact supplement of light what it needs, same as you do with enriching your soil with the correct fertilizers.
It is useless to apply a broad spectrum of everything while every of these micromoles cost you money, when you don’t need that amount of energy at that wavelength.
This probably saves you another 20-30% on energy conversion.