After having fitted a part with LED lamps at first, Merksplas-based Hortipower kicks off the lit tomato season with a full hybrid lighting installation. With the dimming function, the growers are even better able to control the climate and thus guarantee their product stability.

Before we reach the lit cultivation area of the greenhouse, we first pass two disinfection gates. We’re dressed in a hairnet, overshoes and disposable overalls. “Since the increasing virus pressure in tomato cultivation, the safety measures at our company have been tightened quite a bit”, says grower Tom Lefevre, who is also co-owner of the Belgian company in Merksplas, close to the border with the Netherlands.

Still, safety is not the reason for our visit. For the second time in a year and a half, we’ve travelled to the tomato grower with 14.5 ha glass to take a look at the new lighting installation. Over two years ago, water-cooled LED fixtures from Oreon were already installed on 1.5 ha, with a view to extending the lighting season and thus generate more yield at lower heat input and lower (energy) costs.
“LED leads to a more generative plant, with shorter extended growth, which means the tomatoes are ripe five to seven days earlier, and production can increase up to ten percent thanks to the higher light levels”, Lefevre explains. “Because the plant is more generative, also more sugars and nutrients go to the fruits, which improves quality and flavour.” With these arguments in mind, in October the rest of the lit greenhouse acreage of 4.5 hectares was also converted to a hybrid installation.

All in all, the company now has 6 ha with hybrid lighting installed. Per trellis (8 by 5 meters), two out of four SON-T lamps were exchanged for two 1,000-watt lamps of the MechaTronix brand, resulting in a light increase of 40%. The company thus went from 180 to 258 µmol/m²/s. Of this total power, 90 µmol/m²/s is accounted for by SON-T. “When we switch off SON-T in spring because it gets too hot, we have nearly the same amount of light as in the old situation”, the grower explains. Due to the large acreage the LED fixtures have to light in that case, good distribution of the light is essential. “This is also one of the reasons why these fixtures stood out”, says Franky Van Looveren, crop consultant at Tomeco. “They’re long fixtures with four lamps, and the lens in the cover makes for maximum light distribution.”

Van Looveren is present at the interview for good reason. Hortipower is part of Tomeco, a grower cooperative that’s linked to the auction in Hoogstraten, growing a total of 80 ha of tomatoes under glass. The speciality of the grower cooperative is mainly in all sorts of ‘cooking tomatoes’, including San Marzano and various types of plum tomatoes. “In order to supply year-round to the supermarkets, it’s important that the various companies plant during different times of the year”, says Lefevre. This is perhaps the most important reason for growers to invest in LED lighting.

It’s not only possible to light longer in spring and autumn with LED and thus increase production, it also simplifies the early cultivations. “We already want to be in production by mid-November, which means you have to plant in August. That means going into winter with a mature plant, so you have to have one hundred percent lighting, eighteen hours a day”, he says. Not only does that lead to a higher energy bill, it also often gets too hot in the greenhouse. “And because we want to use the screens even more for environmental reasons, this problem will only increase.”
With the hybrid lighting, the company solves this problem by switching off the SON-T lamps when it gets too hot. “The plant still gets the necessary light intensity, and what’s more, with LED you use significantly less electricity, which lowers the energy input per kilogram of tomato”, Van Looveren adds. With the new fixtures, it’s possible to generate 40% more light with the same energy input. “Because we can now manage energy more efficiently, our energy cost price will go down, and we expect a higher yield, so we estimate the ROI to be seven years”, Lefevre says.

When choosing the fixtures, they didn’t rush into things. Talks were held with all suppliers to be able to make a sound judgement. This time, the passively air-cooled fixtures from MechaTronix were chosen. They work in a similar manner to a fridge. “With this new passive cooling technique, we’re convinced that the temperature of the LEDs remains under control, and thus the efficiency will also be optimal”, Lefevre says.
Because only the lamps were replaced, the investment costs were around 55 euros/m². “Normally these fixtures should last 75,000 hours. Because of their longer lifetime, you’re also more inclined to switch on the lighting”, Van Looveren says. The crop consultant, who keeps an eye on innovations at the cooperative’s members, emphasizes that the developments in LED are going in leaps and bounds.

Lefevre agrees wholeheartedly: “Just three years ago, there weren’t any 1,000-watt LED lights available yet, and we bought 600-watt lights with a light yield comparable to the 1,000-watt SON-T lights. Because we’re working with 1,000-wat LED lights now, with more power, we now have more options to adjust the lighting. It’s a constant interplay of plant needs, light intensity and heat development. We can go further there now.”
A new application of the LEDs is also the dimming function, through which growers can adjust the lighting in addition to just switching it on and off. Although the knowledge still has to be built further, the tomato grower expects this will contribute to stability in cultivation. “This way, you can apply a constant amount of light, leading to a more stable and vital tomato. For instance, you can also light on dark summer days”, he highlights.

A PAR sensor in the crops provides the necessary amount of light at plant level. That gives the grower more tools to manage the cultivation. Lefevre believes that in the long run greenhouse horticulture can switch to fully computer-controlled cultivation, with sensors, data analysis and artificial intelligence being able to optimize the lighting at plant level. “But that’s still a long way off. More knowledge needs to be gathered for this”, he emphasizes.
The grower is convinced that LED can cause a revolution in the greenhouse industry though. “Because you can control the light intensity and greenhouse climate even better, you can enter production at different times.” According to him, demand from trade for a reliable quality product is growing. “We’re noticing that demand for our product is on the rise in winter, because we’re less dependent on weather fluctuations like they are in Spain, for instance”, he concludes. 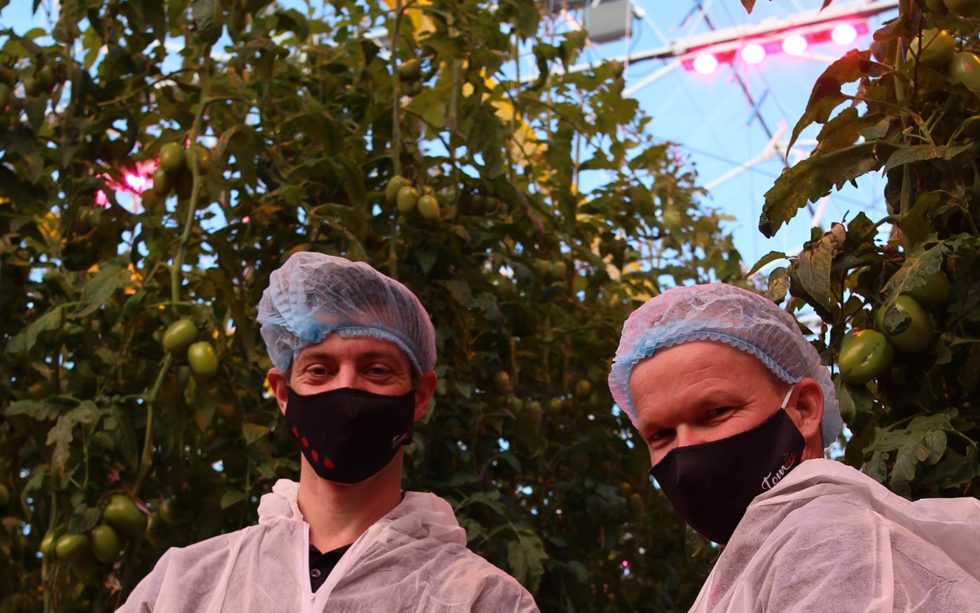 Tom Lefevre (left) and Franky Van Looveren: “Because of the high amount of light, LED makes for a more generative plant, with shorter extended growth, which means the tomatoes are ripe five to seven days earlier, and production can increase up to ten percent.” 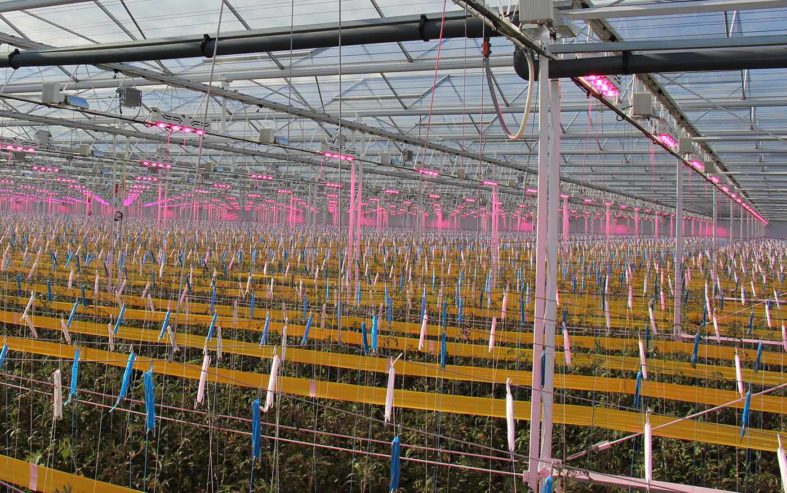 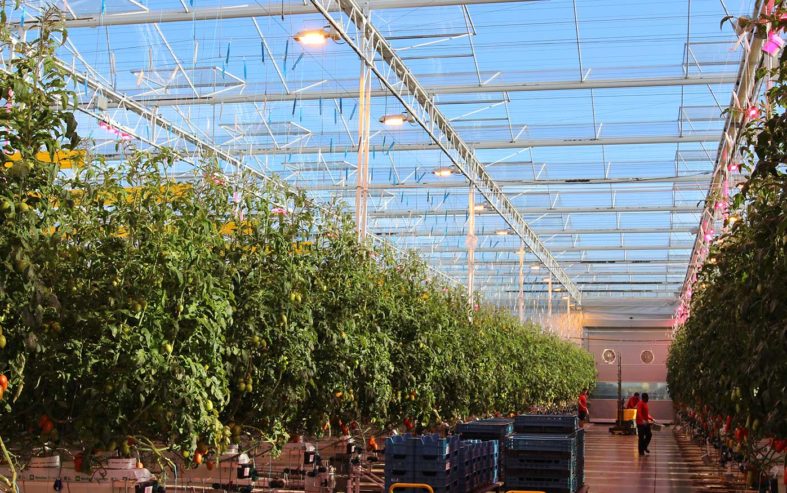 All in all, the company now has 6 ha with hybrid lighting installed.