Growers learn to use 'x-factor' far-red in cucumber cultivation

Growers, researchers and lighting suppliers agree, far-red is the 'x-factor', but when this x-factor should be deployed, that is a different story.

At the Proefstation voor de Groenteteelt (testing station for vegetable cultivation) in the Belgian town Sint-Katelijne-Waver, they are conducting research into high-wire cucumber cultivation with both full led and hybrid lighting in various spectra. One thing is sure: the light recipe for the tomato is not sufficient for an optimal production of the fresh green fruits. 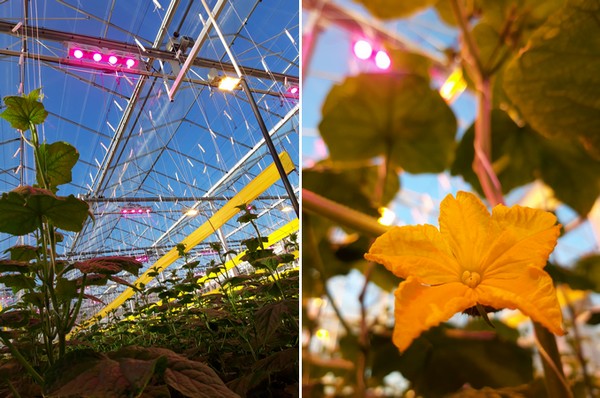 Also in recent years, a lot of research has been done into new forms of lighting for cucumbers. Production growers have been using mostly HPS for a long time, but hybrid lighting, a combination of LED and HPS, is used more and more often

That is still the logical in-between step on the path to full LED, because at one hand, the investment is less high and on the other hand, research still has to show how LED can be used optimally, according to Jonas De Win and Patrick Casteleyn. The first is team leader fruit vegetables at the testing station and manages the cucumber test, while the other is head sales at MechaTronix, which supplied the latest CoolStack MAX to the testing station. 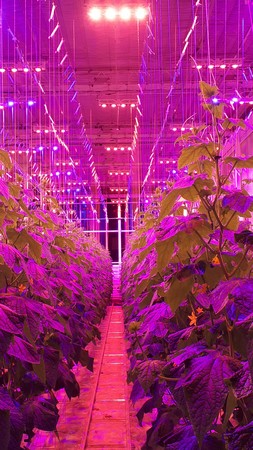 Full LED with every color to be operated separately.

Lessons learned from lack of far-red

These modular LED growing lamps make it possible to continually 'play' with the spectra, and that is exactly what the cultivation researchers hope to achieve. In this new lighted winter cultivation, in which a SON-T reference cultivation is used as a third lighting option, researchers are looking for the optimal use of far-red.

"Previous research showed that far-read is extremely important. In the winter cultivation of 2018-2019, we compared HPS and full LED with a spectrum of 95% red and 5% blue, and we had a lot of abortion. It turned out that the tomato light recipe in LED was not optimal for cucumbers. The growth was not good and also the light efficiency, which means how the plant is converting light into growth, was far from optimal."

The following year, in 2019 - 2020, more investments were made in far-red and actually two hypotheses were tested. At one hand about the steadily increasing of blue light during the morning, then start vaporization and on the other hand, about the already scientifically described stimulating of the assimilate transport to the fruit with far-red. "That was already better. The suspicions about far-red are confirmed. We did not miss the radiation heat of HPS in the cultivation and moreover, we managed to achieve good production results. There is still plenty to optimize, also in the greenhouse climate, such as the relative air humidity and the heat in the head."

Unlike in the Netherlands, where Het Nieuwe Telen (Next Generation Growing) has become increasingly important and the growers focus on energy saving in their cultivation, growers in Belgium first look at optimizing their cultivation, after which energy saving gets attention, both specialists observe. Jonas: "With us in Belgium, there is less discussion about co-generation for example, and growers use more tube heat." Still, also Belgium growers chose more and more for (partial) LED lighting. Patrick: "They can increase the light sum without extra energy input, and so also production."

Classically, there are 4x HPS 1000 Watt lamps set in an 8 meter trellis. Patrick: "With this, growers manage 180 µmol/m2.s in a winter cultivation. By changing 2 of these SON-T lamps with 2 CoolStack Max 1000 LED and HPS growing lamps, growers increase to 260 µmol/m2.s with hybrid, so with LED and HPS. Suppose that growers can responsibly transfer to full LED for cucumber in the future, 3 1000 Watt LED lamps which can realize 260 µmol/m2.s will be sufficient. It realizes an energy saving of 25% and almost twice as much light. In the future, this efficiency will increase even further and the investment in LED lamps will decrease."

Because the research are partially paid by growers, the testing station expressly opts to test immediately applicable cultivation methods and not only invest in full LED, because that step is still a bridge too far for growers. On 14 October, the cucumber plants were planted for high-wire cultivation under HPS, hybrid and full LED, which will last to the end of April/beginning of May. "We choose for two cultivations, because we aim for a more 'flat' cultivation by having only two cultivation changes. These cultivation changes are well thought out so periods with better price forming can be taken into account in the cultivation. By aiming for increased stem density during spring, we can also use the increasing natural light for added production."

Not too little, not too much

The last has to do with the x-factor, far-red. "If there is plenty of radiation during the day, the crop receives all the far-red it needs. We now face the challenge of finding the optimal lighting duration with far-red and the right moments to apply far-red during the winter cultivation. You can also have too much far-red, which can cause a slow down, and plants can be become to generative and overstep.

We want to prevent that, so growers can learn from this and do not make the same mistakes in their production cultivation. It is our goal to help them achieve an optimal cultivation, in which I expect to use hybrid lighting for 260 micro mol to achieve 370 40's per square meter. In full LED with 200 micro mol, our goal is already 320 cucumbers per square meter pre year. These are great steps."