Year-round cucumber cultivation is on the rise. This is also the case at Dutch grower Ties Verbaarschot. He expanded by 40,000m² this winter after taking over a greenhouse from a neighbour across the street. Verbaarschot is one of no fewer than seven growers who invested in new or adapted greenhouses with a high light level before the winter of 2020-2021. In total, roughly 160,000 m² of cultivation expansion. This makes it clear that Dutch and Belgian cucumber growers have determined their strategy for the coming years. "Year round cucumber cultivation will become the new normal," they expect. 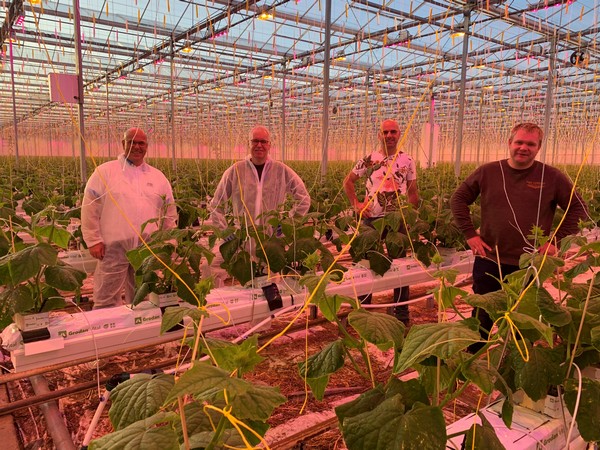 At the time of purchase, this greenhouse was already partly furnished as a lit tomato greenhouse with 3.5 SON-T lamps 1000 watts per compartment size of 8 x 4.5 meters. Nevertheless, Verbaarschot decided to immediately take it one step further and equip the entire greenhouse surface with a higher light level, which gives him a perfect year-round cucumber cultivation, says MechaTronix, who supplied the lamps.

With two CHPs of 2 megawatts each, both greenhouses in Meijel had to run self-sufficiently and the gardens were energetically linked. The solution lay in a hybrid light setup with 50% of the existing SONT lamps replaced by the LED grow lamps from MechaTronix type CoolStack BOOST. In this way, the light level was increased from 175µmol / m² to 240µmol / m², while electricity consumption dropped from 102 watts per metre to 94 watts per metre.

The entire project was supervised by Jan Jansen, owner of Jansen Greenhouse Industry Consultancy. In addition to the lamps from MechaTronix, the services of Cogas South were called in for the cabling of the new installation.

In the greenhouse, Hi Power from BASF Vegetable Seeds is grown on stem density of 2.25 plants / m². Despite the fact that there is still a long way to go in the winter season, the first results can certainly be called spectacular, according to MechaTronix. "The combination of still sufficient heat radiation in the head of the plant produced from the SON-T lamps with the high light level from the LED lamps on top of it seems an ideal mix for this highly productive variety."