In the chapter about Light Distribution you have seen the importance of making your lights sources as small as possible to create an even light distribution over the plant canopy.
Although grow LEDs from this generation are already much better in efficacy than just a few years ago, there is still a considerable efficacy and heat loss which is produced during transformation of the energy in photons.
The thermal loss of a LED package is heavily depending on the conversion technology and can even differ up to 20% between various LED package manufacturers.
In general a red LED package of 660nm has similar as the blue package of 450nm a very good efficacy and produces less than 50% of the energy to heat.

White LED packages which are very often used to create a wide spectrum with combination of blue spectrum with yellow and green start from blue LED dies and use extra phosphor coatings to convert the blue photons to the middle spectrum as illustrated here below.

These white LED packages have typical efficacies of 25% to 30%, what means that respectively 75% and 70% of the energy goes to heat.

That also explains why LED grow lights which try to mimic the sun with wide spectra most of times end up with very low efficacy rates like 2.0 to 2.3µmol/J.

Independent how efficient your grow LEDs are, the created heat has to be cooled away.
The lifetime of a LED is straight forward influenced by the temperature at which it runs.
A LED grow light systems where the LEDs internally run at 65°C can easily run for 75.000 hours of operation, while a system that runs at 85°C merely survives 40.000 hours.
Now you also understand why there is so much difference between the lifetime various LED grow light manufacturers publish.

Low end systems which mostly come as a light bar made of extruded aluminum with LEDs in clusters fragmented over the bar and a simple cover to protect them, mainly come in lifetimes of 25.000 hours to 30.000 hours operational lifetime. Of course with just 3000 operating hours in a greenhouse you can state they still survive 7 to 10 years, but does that justify your investment in LED grow lights which still today is a multitude of working with HPS grow lamps in the past?

Actually the move from 25.000 hours of lifetime to 75.000 hours for LED grow lights is not that difficult.
Advanced cooling systems like heat pipes exist already for over a decade and are used in billions of applications like your notebooks and pads today.

As a technology company we decided from day one to bring these advanced technologies into grow light systems and opt for the use of heat pipes and stack fin technology.

▲ The heart of the CoolFin® advanced LED grow light – a structure of 16 heat pipes convert the heat to a stack fin structure for ultra low temperatures.

A second effect directly related to the temperature of the LEDs you have to be aware of is light decay.
The light decay is the decrease in light output you get over time.
Suppose you have bought a LED grow light which produces a PPF of 1.000µ/s. When the LEDs internally run at 85°C you will get roughly a light decay of 3% per year, what means that after 5 years your energy output is diminuend with 15% to 850µmol/s.

Again here the light decay is directly related to the temperature of the LEDs in operation. When you can keep your LEDs below 65°C your light decay over time is less than 1%.

What is the heat impact of LED grow lights on your environment?

The heat losses of the LED grow emitters as described above don’t immediately implement that the LED grow light will have a big impact on your growth environment.
Since the thermal conversion is already roughly 30-40% more efficient than seen with Metal-Halide and High-Pressure-Sodium lamps, the direct radiated heat is anyway lower than these grow light systems with incandescent light bulbs.

The reason why in many cases we see that there is either a big space needed between the grow lights and the crops, or systems need to be shut down because tip burn of leaves, comes from the direct radiated heat which sometimes is just too hot in absolute value. 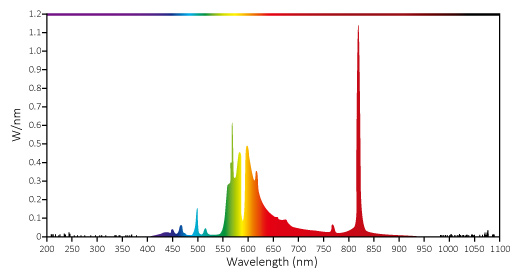 Typical bandwidth wavelength of radiated heat of a high-pressure-sodium lamp at 830nm.

As you see above a SON-T HPS grow lamp emits a big peak of radiated heat at 830nm.

The extra heat energy itself can be stimulating the photosynthesis, but the direct radiated absolute value makes that you need you distance to the canopy much bigger than with LED grow lamps.

Yes they do, but first of all roughly 30-40% less is relative energy.
Second much more of that energy goes to convection instead of radiation.
Third the LED cooler system determines how hot the outer components of a LED grow lamp become and as thus can make that your lamps can go as close as possible on the canopy.

The CoolFin® horti LED grow light at 3.520µmol/s PPF is designed in this way that all outer parts which contribute to heat exchange with the environment stay below 65°C at room temperature.

Is a LED grow lamp system possible which produces zero thermal impact on the growth environment?

Absolutely possible. The only thing what you have to keep in mind that the generated heat losses have to go somewhere anyhow.
So as long as the calories of heat are not transported away to an external environment, the heat losses will impact the environment.
On the other hand this generated heat doesn’t have to be negative for your growth environment – in many cases the extra produced ambient temperature is well perceived by the crops.
The most efficient way to design a “zero-impact” thermal LED grow system is by far using water-cooling for the energy transportation to an external environment.
The chiller cools down the water to a temperature where the main components of the LED grow light system equals the ambient temperature of the environment.

In this way there are now heat calories transferred what makes it a temperature neutral LED system. 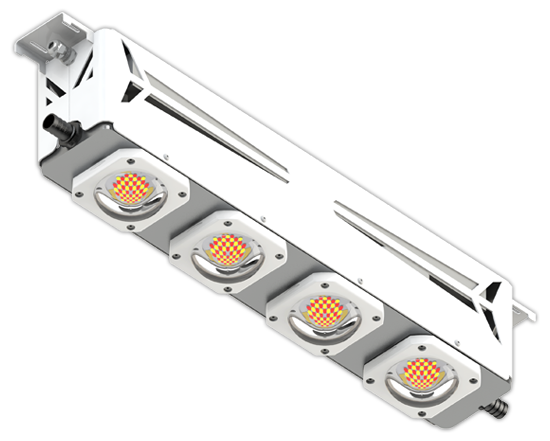